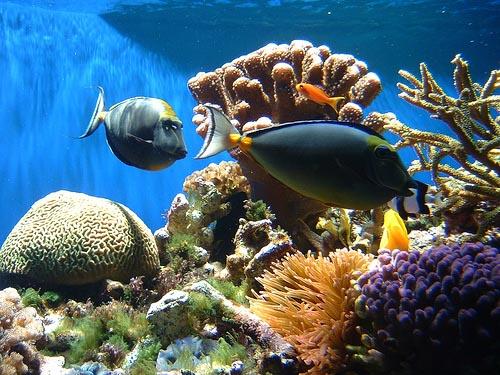 Coral reefs are underwater outcrops of calcium carbonate composed of the skeletons of marine animals known as corals. Corals attach to rock of existing reef and capture passing food with stinging tentacles. They also derive nourishment from symbiotic algae, known as zooxanthellae, that inhabit their bodies and produce food through photosynthesis. Most corals are colonial, and the colorful surface of coral reef consists of thousands of millions of densely packed individuals. As corals die, their skeletons remain part of the reef while new corals grow atop them, increasing the reef’s size. They absorb wave energy, protect shorelines, and host as much biodiversity as no other type of ecosysem. The likely rason is that coral reefs provide complex physical structure in shallow nearshore waters, which are regions of high primary productivity. Besides the staggering diversity of anemones, sponges, hydroids, tubeworms, and other sessile invertebrates, innumerable molluscs, crustaceans, flatworms, seastars, and urchins patrol the reefs, and thousans of fish species find food and shelter in reefnooks and crannies. Larger predators, such as grouper and mora eels, feed on the smaller fish.