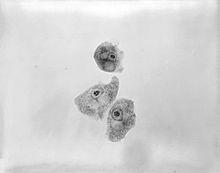 Naegleria gruberi is a species of Naegleria.

Naegleria gruberi has been experimentally shown to be nonpathogenic, although it is related to several pathogenic Naegleria species (e.g. Naegleria fowleri).

Naegleria species are members of Class Zoomastigophorea, which includes the amebomastigotes. The latter name is derived from the common name for many members of Phylum Sarcodina (the amoebae and relatives), and Phylum Mastigophora, the flagellates.

The puzzling life cycle of Amebomastigotes led to the term 'amebo-flagellate,' which describes the two known active stages. The transformation of amoeboid forms into flagellates was described by F. Schardinger (1899). He was working with an organism he called Amoeba lobosa, which he isolated from feces. He found that they formed cysts - dormant forms - under certain conditions. He also described a problem with 'flagellate nuisances' that kept appearing in the water droplets that appeared due to condensation in his agar dishes. His attempts to find some developmental stage of the flagellates were fruitless, resulting always in a plate full of uniform cysts. By accident, he inoculated a hanging drop with amoebae, and two hours later discovered that they had been almost entirely replaced with fast swimming flagellates. Schardinger had performed the first recorded Naegleriatransformation experiment.

Amebomastigotes are very common soil protists that have been isolated from soil and fresh water, and occasionally from marine water and sediments throughout the world. Many members of Class Zoomastigophorea are pathogenic. Some strains of Naegleria are deadly, but fortunately they are uncommon. Naegleria fowleri, for example, can contaminate fresh water and infect human hosts while the latter are swimming or bathing. While in the flagellate state they enter through the nose and parasitize the brain in the amoeba form. The result is amoebic meningoencephalitis, which is nearly always fatal. Fortunately, Naegleria gruberi is not known to be pathogenic to humans, and the commonly used laboratory strain (strain NEG) is harmless.