Source of the photo
http://www.microbiologyprocedure.com/soil-microorganisms/protozoa-of-microorganisms.html
Author of the description
KÖRINFO 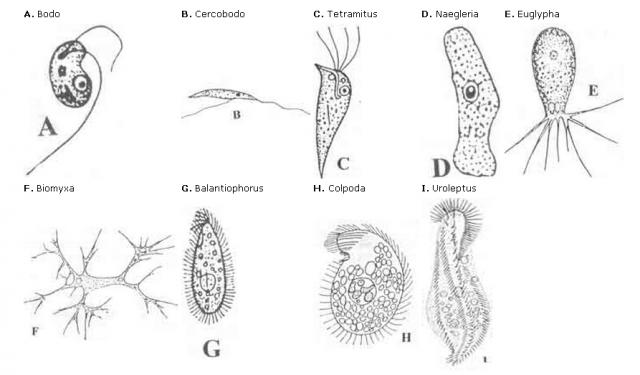 Soil protozoa are unicellular. In general they lack chlorophyll barring few exceptions. They are characterized by a cyst stage in their life cycle which can help the species to withstand adverse soil conditions.

Barring a few genera which reproduce sexually by fusion of cells, the rest of them reproduce asexually by fission. The flagellated protozoans belonging to the class Mastigophora are predominant in soil.

Protozoa live in soil at the expense of bacteria of the genera Aerobacter, Agrobacterium, Bacillus, Escherichia, Micrococcus and Pseudomonas by ingesting them into their protoplasm. The protozoans prefer certain species of bacteria for their nutrition.

In fact, Aerobacter cultures are recommended as a food base for isolation and enumeration of soil protozoans. When the food base (bacteria) diminishes in soils, the protozoa get encysted (form cysts) for survival against the harmful action of high temperature, drought, application of pesticides, etc.