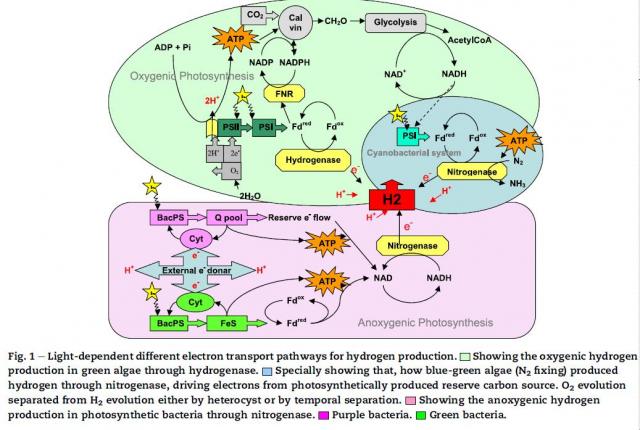 The major challenges confronting the large scale production of biomass/hydrogen are limited not only on the performance of the photobioreactors in which light penetration in dense cultures is a major bottleneck but also on the characteristics of the organisms. Other dependable factors include area/volume (A/V) ratio, mode of agitation, temperature and gas exchange. Photobioreactors of different geometries are reported for biohydrogen production: Tubular, Flat plate, Fermentor type etc. Every reactor has its own advantages and disadvantages. Airlift, helical tubular and flat plate reactors are found most suitable with respect to biomass production. These bioreactors may be employed for hydrogen production with necessary modifications to overcome the existing bottlenecks like gas hold up, oxygen toxicity and poor agitation.

This review article attempts to focus on existing photobioreactors with respect to biomass generation and hydrogen production and the steps taken to improve its performance through engineering innovation that definitely help in the future design and construction of photobioreactors.