Source of the photo
http://protist.i.hosei.ac.jp/taxonomy/sarcodina/lobosea/testacealobosia/difflugina/centropyxidae.html
Author of the description
KÖRINFO 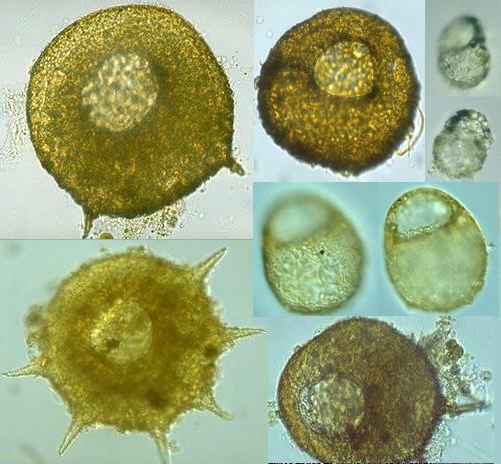 Testate amoeba, the shell is brown, ovoid and in outline the sides are usually parallel becoming semi-circular at the extremities. In lateral view it is spherical in the aboral region and tapers towards the aperture. It is composed of sand grains roughly arranged over most of the shell, except in the apertural region which appears smooth. This smoothness is not due to a thick overlying layer of organic cement. The aperture is invaginated, oval, subterminal and has a distinct rim. Length of shell 60-117 microns, breadth of shell 50-90 microns, depth of shell 41-63 microns and diameter of aperture 31-49 microns.